In 1940, the brilliant screenwriter Ben Hecht wrote, produced, and directed the close-knit drama film “Angels Over Broadway“. Make no mistake about it, this is a flawed movie.

When watching there are several moments when things could have been crafted better, but looking past these small insignificant misteps, and focusing on the heart of the story, (which is great) and the brilliance in the characters (which is significant) will provide a fruitful, worthwhile film from start to finish.

The entire movie, which feels more like a stage play than a film, takes place over the course of one rainy night in New York City. It is essentially a four-man show, that gives each of the main characters a chance to shine. Charles Engle (John Qualen) is a down on his luck businessman, who has embezzled $3000 from his employer in order to support his wife’s extravagant lifestyle, and now, being caught, is contemplating suicide. Bill O’Brien (Douglas Fairbanks Jr.) is a low-level con-man, looking for some poor, rich, sucker to bleed dry. Gene Gibbons (Thomas Mitchell) is a past-his-prime play write, dreaming of his glory days, and wishing he could once again write with some imagination and meaning.

Last, but clearly not least, we have another low-level con artist, Nina Barona (Rita Hayworth), who is just looking for a way to earn a buck, and is more than willing to use her beauty to achieve this goal. All four of our disillusioned misfits wind up in the same nightclub, and after learning of one another’s troubles, come up with a plan for joint salvation.

As a character study, “Angels Over Broadway” is interesting and enthralling. When you hear the name Ben Hecht, writer comes to mind well before director, so it’s no real surprise that it is the writing that shines in this picture. He was given an Academy Award nomination for this original screenplay, and it is much deserved. On the surface it might not appear to be all that engaging, but once the film starts moving, there is a darkness that sets in, that is unsettling, but extremely intriguing. These are not happy-go-lucky people, living carefree lives. They are very real, and therefore, extremely relatable.

As with any character drama, the actors play a major part in the success of the picture. In “Angels Over Broadway” there is an interesting mix involved, including Hayworth, who looks great in this role, and is able to easily pull off the con-woman looking to change, because, well, she looks like an honest, good-hearted woman, desperate for a little romance. Fairbanks is solid in a role that doesn’t demand too much from him. 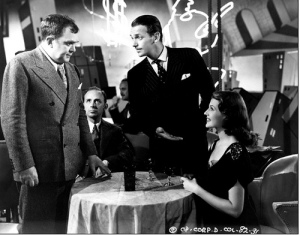 It’s not really a leading part, despite his top billing, but he meshes well with the others, and gives an honest (and one of his better) acting performances. In a somewhat unexpected twist it’s Thomas Mitchell and John Qualen who actually steal the picture. Their acting is phenomenal, and considering the substance of their roles, much of the film hangs on their performances. Luckily they deliver… superbly.

Lee Garmes served as cinematographer on “Angels over Broadway”, and is also given screen credit as co-director. Even combining Garmes and Hecht on directing duties still leaves “Angels Over Broadway” with a somewhat amateur quality. Garmes is an accomplished cinematographer and Hecht is one of the better screenwriters out there, but neither are (or should be) remembered for their directing abilities.

Oddly enough they re-teamed in 1952 to co-direct another film “Actor’s and Sin”, with about the same results.

Even with a few small flaws, “Angels Over Broadway” has much to offer a patient audience, not afraid of commitment. Of course with Qualen, Mitchell, Hayworth, and Fairbanks, it’s hard to go wrong!